Overview of the December 10 conference

Overview of the December 10 conference

In April 2020, at the start of the COVID-19 pandemic, the Ahimsa Fund launched the “Ahimsa Renaissance Movement” initiative, or ARM, as a means by which to learn from the crisis. It was founded in the belief that COVID-19 has to be a starting point for change.

One early commitment of ARM was to hold a series of conferences on fundamental issues around why that change is needed, what it could look like, and how to bring it about.

For the first meeting of this series, we were honoured to receive one of our long-time friends, who has supported Ahimsa for many years: Michael Møller, former Under-Secretary-General of the United Nations and the 12th Director-General of the United Nations Office at Geneva. In discussion with three young leaders from Malawi, India and Canada, he shared his own vision of how to transform the COVID-19 crisis into an opportunity. These three young people were Barwani Msiska, Project Manager for Social Innovation at Health Initiative Malawi; Charlotte Evans, Research Assistant at the Institute for Circumpolar Health Research; and Vedant Batra, a social impact and finance consultant. As governments around the world tightened restrictions on movement and prepared to rollout the new COVID-19 vaccines, the four of them discussed how best the human race might navigate the tricky field ahead. This article is an impression of those discussions.

2020 is a time of strange contrasts. The world is more global than it has ever been. Information flies between people and families and communities at the speed of light, but millions of us have spent months this year confined to our homes. We’re living through the best years of humankind, but we could be about to witness its disintegration. A complex mix of climate, conflict, forced migration and ecological and health issues have become real existential threats. Capitalism has been an incredible force for human development, but it has also encouraged short term material gain at unimaginably high material cost. Inequality and political instability are increasing in societies across the planet; slow burning conflicts smoulder in a fast burning climate; the risk of new and emerging diseases is rising; and the nuclear stockpile is ageing as fast as the few remaining people who remember how terrible those weapons really are. Meanwhile, there is the sustained, mundane threat of more familiar public health problems like antimicrobial resistance, poor mental health, HIV, tuberculosis, and obesity—and, as an unpleasant cherry on a particularly nasty cake, rising resistance to vaccination.

Onto this stage, enter COVID. Though we hear often that “nobody could have seen this coming,” anyone with a passing acquaintance with global health security knows that’s not true. So: is the speed and force of this pandemic simply a consequence of failing systems, more evidence of a darker future? Or might we perhaps make it our salvation and frame it as a chance to reconsider, reconfigure and reset?

If you could choose any time in human history to be born, it would be foolish to choose any moment other than now. Admittedly, progress is asymmetric and wellbeing is greatly unequal, but a shared prosperity created by 20th century multilateral structures forged from the mess of huge world wars has, in only 75 or so years, brought about unprecedented peace, rights and wellbeing, suppressed mortality, war and disease, and elevated education, science and rights. On average, humanity is in a better place than it has ever been.

Now, though, we face a transition away from the old international order. The size and scope of the coming threats, whether to climate, to health or elsewhere, suggest that the structures that brought about this progress are no longer, in their current forms, fit for purpose. We are moving from what has been for many centuries a state-centric governance system to a more multi-party approach, the best outcome of which would be a new model of multilateralism: something more collaborative, integrated, networked and de-siloed, than we have now, with civil society, business, youth, academia, religious communities and others taking decisions alongside governments.

As the world order and the rules that govern it are questioned and begin to shift, the importance of the Sustainable Development Goals is clear. They are an extraordinary achievement. They offer us a chance: a roadmap towards a more sustainable future that engages everyone. We have the tools, rules and solutions to achieve them, though maybe not yet sufficient will: governments alone have proven themselves incapable of solving the big problems. Collaboration is the only way to accelerate progress, in a joint effort across global human society. We all bear this responsibility, but today’s young leaders may carry more of a burden than most.

Compassionate leadership will be at a premium in all parts of our societies, including the private sector. Businesses are already coming to the realisation that they cannot continue to operate as they always have without considering the wider wellbeing of the communities in which they work. It is more and more clear that unless businesses are sustainable and socially responsible, three things will increasingly happen: people will not work for them; people will not buy their goods and services; and people will not invest in them. Many of these companies are already part of the decision-making around our future, but in a new multilateralism that role is likely to be formalised; and for that to happen, they need to be seen as responsible. Civil society will be crucial in effecting that transition, helping foreground compassion in our biggest decisions.

Another important emerging group of stakeholders is that of the world’s metropolitan authorities. Over the coming decades, a larger and larger proportion of the population will live in urban environments. In many countries mayors of the largest cities are already more powerful than parliamentarians in pragmatic terms. Cities are where most of us will live and receive services, and urban structures are more and more important in deciding how we manage the planet. City authorities can capitalise on this, making significant changes by leveraging a natural proximity to their citizens that national governments often lack.

If COVID-19 is really to be an opportunity, we also need to emerge from it with the beginnings of a reformation of the United Nations and its partner structures. What they have achieved has been awesome, but they have become sclerotic, hard to adapt and reform. Many of these great institutions, if they cannot change, are likely to be sidelined or replaced in the next 10-15 years.

As a concrete example of a project embodying this new multilateralism Mr Møller presented the Geneva Science and Diplomacy Anticipator, or GESDA (www.gesda.global). GESDA is an organisation established in Geneva to scan cutting-edge science around the world that will bear fruit in the next five to 25 years; to bring the scientists together with diplomacy actors who implement mandates, projects and programmes across the world; and to set them all the joint task of ensuring that science serves humanity.

Around 100 scientists involved in this initiative are currently working across four themes: quantum revolution and advanced artificial intelligence; ecological regeneration and geoengineering; human augmentation; and science and diplomacy. The discoveries they are making now will shape how we view and relate to each other and our environment in perhaps the most crucial period of history our species has faced in millennia. It is also an exciting, fun, extraordinary initiative on which to work: scientists love having a funnel through which to push research and outcomes; NGOs and others are happy to have accelerated access to new technology; states see the impact and the benefit; and private and philanthropic money wants to invest. If there is one community in the world that can think across borders, it is that of the scientists. They have shown this in the response to COVID: to have several vaccines for a new pathogen in less than a year is unheard of; but with sufficient political will and financing, it was done. Imagine the scale of achievement possible if this was an everyday way of working, rather than an awe-inspiring anomaly.

Away from the cutting-edge science and Swiss-based diplomatic world, it is in fact actors in the global South who are leading the way towards an improved future, generating new knowledge for global health systems by recognising communities’ insights and experiences and bringing local solutions to bear on global problems. There are countless opportunities to bring the deep knowledge of communities around the world to the front line of the new multilateralism; and more and more, that is exactly what people are doing.

It should be acknowledged that for all the recent advancements in the world of technology and healthcare, for the most part the ways in which we deliver care to those who need it most has not changed. There is still a sore need for systems innovation and research to catalyse, build and test novel, local innovations that can be brought to scale. Our pipelines for development and diplomacy are wrong: local actors are seldom to be found at the biggest tables: we celebrate their work, but bar them from decision making. But it is really those driving small-scale change in lower- and middle-income countries who must lead the advancement of universal health coverage, improved primary care and basic development. As we celebrate new and big ideas, we have to make sure that the basics are working for those that need them. In communities all around the world, people know what needs to be done. The rest of us must make sure that we support them to make it happen.

Technology allows most of us to hold the world’s learning in our hands, to access knowledge and to challenge accepted wisdoms instantly. It is a challenging environment to navigate and one in which we all bear enormous responsibility to use these powers carefully, holding not only our leaders to account, but also our communities and ourselves. The potential payoffs are huge. For example: in only a couple of years a small group of determined young people has changed the climate discussion completely, achieving what reluctant governments were unwilling to do and forcing real change, to the point where some G7 governments are declaring a climate emergency and changing their budgets accordingly.

With all the positive potential of this freedom of information also comes a potential for harm. Political processes take seconds now, as decision makers react to tweets and messages without time to reflect, think or seek advice. Social media is swimming in a flood of fake news and mis- and disinformation—COVID-19, for example, has been declared by the Director General of WHO to be as much an “infodemic” as it is an epidemic. One big step forward in this regard would be to ensure greater consequences for the big tech companies that allow this to happen. Despite frequent expressions of good intentions, the major players have shown little to date by way of robust action against hate and falsehood. We cannot allow malicious voices to torpedo our best initiatives—whether they be individuals or hostile states deliberately disrupting the social fabric of other countries.

For many in the last few decades, western philosophies have prevailed as a basis for how we govern, with the rights of the individual at the centre. Now, perhaps, we may need to move more and more towards an Asian model in which the rights of the community are essential, acknowledging that we can no longer sustain a system in which everyone does what they want to.

We have damaged the planet to such an extent that we must now prioritise the wellbeing of communities over individuals. This is the change we must live, and with it will come inevitable problems and challenges. The change will be wrenching for some, and we must manage it with care and compassion. 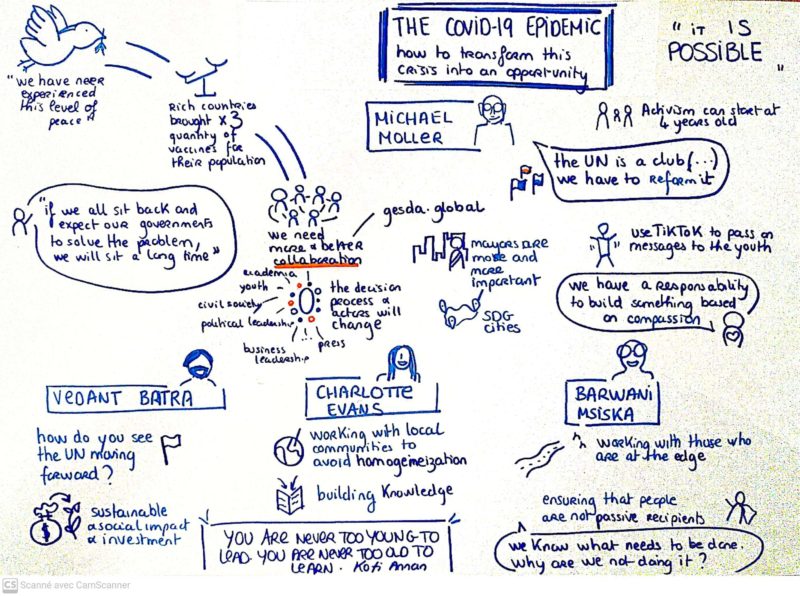 Graphic capture of the conference by Lily Gros