It is a truth universally repeated that the COVID-19 crisis is in want of true leadership. It is everyone’s fault, but no-one’s fault. Everyone predicted it, yet no-one anticipated it.

Jean-François de Lavison, founder of Ahimsa, has some thoughts on how the Foundation’s new Ahimsa Renaissance Movement (A.R.M) initiative represents its best response. “Criticism is easy,” he points out, “but in truth, the responsibility for most dysfunction on this scale is shared. If everyone would acknowledge that and sit down around a table to reflect on how best to recover, there would be so many ways in which the world might emerge stronger from the pandemic.”

Conversely, then, one of the biggest mistakes we could make in the handling of this crisis—and in this regard, competition is tough—would be failing to learn the lessons that would help us confront the next one.

Because we all know that there will be a next one. After all: everyone has predicted it.

So, if A.R.M is responding to a leadership deficit, it has to ask where the leaders went, and why.

“We are conditioned by our education. Our children are rewarded at school when they are the first, the best, and we encourage them in that. Later, professional life is the result of that race to perform, the lesson learned and endlessly reinforced over the years. That’s not always the right direction.
Our systems increasingly value personal success over values that make up the richness of being, or the search for meaning. We value individualism. Our children are alone with their smartphones, their headphones: they close in on themselves, lacking exposure to a humanist environment that teaches community and perseverance.”

But how much can this kind of cultural characteristic change? How can Ahimsa contribute to that—and in particular, how can the A.R.M initiative, with its stated goal of prioritising concrete action, be useful in this regard?

“Ahimsa’s network can be valuable in marrying the top-down perspective of, say, the SDGs, with the bottom-up perspective, the needs of the field. Not to oppose them, but to make them work together. We have built such a valuable network with people we know well, and we want to use that, to deploy to the best effect what we created over all those years. It will be one of our strengths.” 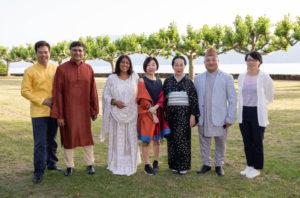 A.R.M will be built on principles of collaboration, Jean-François explains: partnership and sharing, building bridges across disciplines, nationalities, organisations and individuals, whatever the colour of their skin, their faith, their nationality or their background. Its central tenet will be to reconcile the oppositions that are such common structural elements of modern discourse: rich v. poor, young v. old, local v. global, women v. men, traditional v. allopathic medicine. An early task of A.R.M will be to produce constructive reflections on the lessons of COVID-19, holding on to the positive things we have learned during our lockdown periods, and emphasizing the need to adapt our way of life to our environment.  The recommendations of the A.R.M project will be challenged via Ahimsa’s wider international network, which has now been established over 40 years: a network of high-calibre partners, sharing Ahimsa’s vision, values and desire to contribute, in a spirit of humility, to improving the world.

“First, we need to create a spirit within A.R.M. in which everybody has to contribute, and a drive that is shared and understood by all. Then, we need to have some creativity, to allow initiative inside the framework created by the values of Ahimsa. And then, concrete reflection within a group where people have good experience of each other, good wisdom, good mutual respect. And the idea is to bring this smaller group together, and from their discussions to bring forth new proposals, new initiatives with which others want to join.”

A.R.M. will be project-focussed, within the overarching idea sphere of global health, and with two central themes. The first is the One Health concept: that when we speak about global health, we don’t speak just about human health, but animal and environmental health as well. The second is to see past the opposition between traditional and allopathic medicine to a more holistic vision of health that encompasses not only these two fields of expertise but mental health, wellness and wellbeing as well.

“I believe very much in the snowball effect,” says Jean-François. “If the work of ART reaches two per cent of the people we want to reach, it will be a good start. It will take time, but I would like very much to say that at least we have tried.”

Ahimsa’s vision has always been an optimistic one. It is a vision of a future, perhaps a near future, in which good health is contagious, spread and reinforced by a global network of strong collaborations and partnerships. In this future, a mass social movement of health literate people, who are spiritually confident, technologically able, and ecologically aware, supports the work of these partnerships and drives it on, because they share the values that underpin it: they are innovative, creative, productive and sensitive to social injustices and inequity, and they see that the only way in which humanity can dig itself out of its present holes is by working together.  Fundamentally, people concentrate more on what they can share than on their differences. Jean-François emphasises the fact that ”our differences are strengths on which we must build our future, not difficulties to hide behind”.

The recommendations of ART will be a first step in Ahimsa’s efforts to utilise the wisdom and understanding of the Ahimsa network, its appreciation and experience of the world as it is now, to generate proposals that will build that vision, small piece by small piece. Anything that cannot be successful to the local will need to be rethought. 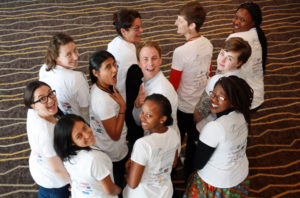 A.R.M’s recommendations will be addressed primarily to younger generations, who will be an integral part of A.R.M.: the people who will, for the most part, have to confront these future challenges; and it is, after all,  a duty that falls to every one of us to pass on what they have had the opportunity to learn.

“We can accept failure. It is normal to make mistakes, but we cannot accept not trying to contribute to a better world,” says Jean-François. “The ambition involved is immense. But we have the desire and the confidence to move mountains.”

Women leaders are better at fighting the pandemic
http://ow.ly/BB5f50AQ6zm