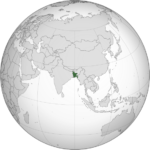 Bangladesh is a country with a population of 180 million, three times that of France, yet is only a quarter of the size.

A country in which a tiny minority of the population is very rich, often more so than in our northern countries, amidst a vast majority living in extreme poverty. One of the poorest countries in the world, where one meets the poorest of the poor.

Bangladesh, a country that suffers from particularly harsh natural conditions, including monsoons, flooding, cyclones and earthquakes.

I have met with people who, as a result of these conditions, have had to start afresh 17 times in the last five years. Each time, they lost everything, and each time they had to rebuild everything, because in Bangladesh, flooding and cyclones are not merely annual events, they recur two or three times in the season, destroying everything.

Compounding all these difficulties, the country has a terrible public health problem, in that 90% of drinking water is contaminated by arsenic, which is slowly taking a dreadful toll on the population. According to the World Health Organization, the population of Bangladesh is suffering from “the largest mass poisoning of a population in history”. One in every five deaths is due to arsenic.

Despite this contrast between misery and wealth, the indomitable climate, the seasons with unbearable humid heat followed by unprecedented downpours, the 32 major rivers that cross the country and become uncontrollable during monsoon rain, I encountered a population full of compassion and hope. Despite these dramas, these traumas that leave lifelong indelible scars, this country of contrasts is also a country of solutions, models, commitment and fresh starts, a country of smiles  that enrich those who receive them without impoverishing those who give them away. In the words of B. Spinoza, the closest unions rest on contrasts.

It is a country that, despite the suffering inflicted by its own fate, has welcomed over a million Rohingya refugees – what a lesson!

The poorest of the poor, lending a hand to the most desperate of refugees: the display of solidarity is magical…

What a lesson for us, in our settled lives, as we cry out in panic and alarm at the idea of taking in mere hundreds of refugees.

My thanks go to this young country, independent since 1971, that has not only accepted the situation inflicted on it but also deals with the situation of others.

This little country, representing 0.03% of the world population, is where I have encountered the largest NGO in the world ahead of Médecins sans Frontières, BRAC, which we are privileged to work with. It is also home to a world-renowned organization, Grameen, whose founder and 1979 Nobel Peace Prize winner Muhammad Yunus, travels the world to eradicate poverty. I have been welcomed by Friendship, a humanitarian organization recognized for its action in favor of the underprivileged and the Rohingya. Its founder, my friend Runa Khan, set aside the comfortable life of her rich Bangladeshi family to care for the country’s poorest.

I have had impassioned discussions with Muhammad Yunus, who is working to ensure that the underprivileged are taken into account in the organization of the 2024 Olympic Games in France. How to ensure that the country’s most deprived populations benefit from this moment of glory? How to be sure that the projects and investments do not, once the event has passed, fall by the wayside to general indifference?

I have lived far from modern comforts, on the rivers, near a hospital boat, a brilliant idea initiated by Runa to come to the underprivileged, for if healthcare does not come to those who have no access to hospitals and dispensaries, they will never receive any care. I cannot conclude without giving a friendly nod to the French medical team who came to operate on the boat and, as they put it themselves, give a little of their time and their compassion to look after those who are in need. Thank you to all these ambassadors of solidarity, for their gesture of love.

There are fine things to see in the field, things to come and see because we do not hear enough about them. Human poverty often brings richness of heart and mind, as I have seen once again in Bangladesh.

Thank you to all my friends in Bangladesh for a new lesson in life.

Applications are open! We are looking for the top 25 innovations for #health and #SDG3 to be showcased to global leaders at our annual Health Innovation Exchange event in May. Go to https://bit.ly/2wIuhNW to apply and find out more details. #innovation #HIEx

Social justice cannot be conceived without solidarity and compassion. Learn the benefits of altruistic cooperation, according to our founder @matthieu_ricard: https://www.matthieuricard.org/en/blog/posts/cooperation-an-answer-to-the-great-challenges-of-our-time
#Altruism #SocialJusticeDay #SocialJustice #Nepal #India