A Discussion with Jorge Vivanco

A Discussion with Jorge Vivanco

Background: Jorge Vivanco has wide experience in humanitarian affairs and in business, in Mexico and throughout the Americas. He is member of the Ahimsa Fund board and strongly contributed to the organization of the Ahimsa Forum, which brings together health professionals from the public and private sectors and religious communities. Jorge’s focus today is strongly on core values and on preparing for the remarkable changes that are taking place in the world. 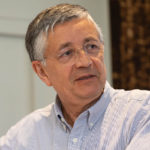 On June 18, 2020, Jorge took in a webinar organized by the Berkley Center in which he had a conversation with Katherine Marshall that focused on the intersection of the COVID-19 pandemic intersection with the long-standing crisis around the borderlands between the United States, Mexico, and the northern triangle countries of Central America. How is the pandemic experienced by different civil society organizations, particularly religiously linked communities? What new programs and processes are emerging in response to the current crisis? How are continuing programs affected? Have promised efforts to reimagine a post-COVID-19 world begun? The full conversation can be watched here. This exchange reflects some highlights of the discussion.

To start with the extraordinary events that are happening now, what is your sense of what is happening in Mexico but also along its borders? This was a dramatic crisis where psychic energy and attention were focused, but it has almost vanished from the news.

To understand how the COVID-19 outbreak that we have suffered since March, affects us in Mexico, we have to see the whole picture. Mexico is a country affected by large, continuing, dynamic movements of people. At least 300,000-400,000 people are moving at any time from Central America to Mexico, most of them trying to reach the US to get a job. Besides these people seeking jobs, there are 400,000 to a million people (it varies a lot by year), who for a century have also been moving and looking to the US for jobs but also inspired by the American dream. So Mexico has several hundred thousand people moving all the time, mostly northwards.

When the COVID-19 outbreak began in March, the Mexican authorities acted to try to stop that migration from the southern border and along the northern border, this because of some agreements they had reached with the Trump administration. They have deployed around 5,000 people from the National Guard along the southern border and 15,000 on the northern border. This, of course, has curtailed migration to those destinations and it has decreased to at least to one-third of the normal numbers. So although migrants are still coming into Mexico and many are still entering the US, the movement of people has been sharply reduced. This does reduce the risks for the COVID19 outbreak, but it has many other effects.

What is happening in the borders? Along both borders, there are two big stories in what is happening. One is that the more official channels are supporting people, through official hospitals and other public services. The other is what happens alongside that, through the NGOs, World Vision, WHO, and many other organizations, including many churches. They are supporting all these people, trying to supply the goods and resources needed to avoid and treat the outbreak. What these NGOs have been doing is an amazing effort. I talked recently with the people responsible in Tapachula, near the southern border, and in Tijuana, the most important border crossing with the US. The numbers they gave me are amazing. They are operating 40 or 50 shelters along both borders. They have almost no cases of COVID and all cases that have been discovered are under control. People have enough supplies.

Thus, we are fairly optimistic about COVID cases among the known communities and about the mobilization efforts, but we are concerned about all the other people as we don’t know where they are and their situation in regard to COVID.

Is the support organized, or is it generally spontaneous?

Fortunately, from about four to five years ago, there are very good coordination mechanisms among all these organizations. I would say UNHCR [ACNUR in Spanish] is playing strong and positive roles here in Mexico, along with WHO, World Vision, UNICEF, and many religious organizations. They have a board (the ‘International Protection Board’), where they meet regularly, and, from the very start, they have tried to ensure that there is no duplication of action. When I was in World Vision working on such programs we realized that poor coordination was a real problem. In some areas, for instance, World Vision had a program monitoring the weight of newborns. One day we realized that some newborns had been weighed and monitored by five different organizations. We agreed that this was crazy, so we organized a mechanism, trying to identify where each organization was strong, and where tasks could be divided among us. We agreed to split the job. Of course, this made us more efficient. So, when the outbreak came, we already had a coordinating mechanism in place, both for the US border and for the Guatemala border. They meet regularly now, of course very often, and they report on numbers of requests for help. They share resources and knowledge. They also share people. This has been working astonishingly well.

What are your thoughts on the current crisis and paths forward?

Humankind is indeed living through an unforgettable season. We mourn and grieve for the suffering that so many are experiencing. But we also must take advantage of the experience. Humankind, I believe, has to reset their hard disk. We have to come to an analysis of the basics and to reconsider the potential of collaboration and the potential for teamwork. I know that these two subjects are used constantly, everywhere: teamwork and collaboration. But believe me, we have seen results that show the enormous potential that humankind has if we really work together.

Let me give you an example of something I learned about just a few months ago, and in highlighting it I want to underline that the problem is not necessarily always money.

I visit a school on the Mexican border with the US, in Tijuana, a school with probably 1000 students and very low levels of educational achievement – let’s say on a scale of one to ten, they were about five. They were concerned and looked for ways to improve. They collaborated with some schools that World Vision was working within El Salvador. In El Salvador, there was an experiment in a group of schools. In each group of 50 students, they took the five with the highest marks and the five with the lowest and assigned the first group to work with the second. They taught the first group of five mentors how to handle things and then arranged for each to meet with a student from the lowest group every day, for one hour before the end of the school day. They met in a classroom that kept them isolated. Then each one of the mentors helped the students to understand what they had not understood during the day. Just like that: simple, no money needed. And after six months the average scores of the schools increased by 25 percent, with no money invested, just collaboration.

We have the resources right in front of our eyes. But we need to learn from these experiences to work together, to collaborate. The joint efforts of groups of faith-inspired organizations with WHO, UNICEF, and others have achieved astonishing results, just with collaboration. We need to do that. We need to reset, and we need to come back to basics, to achieve what we can and must do.

The world needs now to focus on core values. We all have to review our own values, in our homes, in our jobs, in our ministries. If we don’t do it now, we will never do it.

And looking ahead? What are your thoughts?

There’s a Mexican metaphor: “the drop in the glass that caused it to spill.” When I was young, I began to investigate why when a container was filled with water it could hold more than the container’s capacity. I soon understood that water has a capacity called surface tension that allows molecules to coalesce in such a way that they withstand great pressure until it exceeds the limit of the capacity of the molecules. Then the water spills out. But, curiously, not only the molecules that broke the limit spill. They drag thousands of other molecules along, a consequence of having broken that veil of molecules that created that liquid’s surface tension. I fear we are living such a point today.

For centuries, humanity sought to live better and used its capacity for reason and memory to create technologies that allowed it to achieve these objectives. Watersheds in this story are the creation of agriculture, which helped end wandering tribes, and the industrial revolution, born in the UK in the 19th century. This technological movement allowed humanity to mass-produce goods at very low costs.

What our species did not consider was that the environmental balance that made it possible for many species to live in harmony with human beings was breaking down. The crisis we face as a result will change culture and ways of life in short time. We have to return to basic principles, so this does not end our stay on this planet. We live in a civilization capable of producing unlimited quantities of goods but at the cost of destroying forests, rivers, water, species and the atmosphere. Our planet is now like the glass of water about to overflow.

The most severe crisis is that of values and leadership that are the essential foundations. Lack of leadership results from the erosion of values, as there are no commonalities that bring unity of criteria and purposes.

We must prepare as a society to face this challenge once we have defeated this pandemic.

At the threshold of a new era by Jorge Vivanco

This exchange reflects Jorge’s discussion with Wilma Mui (WFDD) during the Ahimsa Forum held in June 2017 in Annecy, France. The focus is on his remarkably diverse career and on what took him into the organizations that work with the poorest