Not many healthcare conferences begin with oversized sculptures and poems of loss, not even in these weirdly unhinged months of pandemic innovation. Ahimsa has always done things differently, though, with heart and art to the fore; despite enforced distance, this year is no different. After taking part in an introductory performance, when asked by Ahimsa President Jean-François de Lavison why she wrote, poet Homa Arzhangi gave a simple answer. “The world is pitiless, unjust and violent. It is essential to provide hope. As a writer, it is my duty.”

This marriage of hard-headed realism and pragmatic determination to do something constructive was a fitting start to the meeting’s first session.

The enterprise approach to poverty entails designing business-oriented solutions to social issues instead of following traditional approaches based on charity and aid. In this talk, marshalled by moderator Kim Tan (Chairman of SpringHill Management and co-founder of the Transformational Business Network), speakers showcased many ways in which this can be done.

Dr Tan’s own portfolio includes projects that have turned forty thousand acres of degraded South African farmland into wildlife park, bringing private investment, economic transformation, job creation, education and conservation to a previously neglected area; enabled farmers in Zambian forests to double their incomes by keeping bees and harvesting honey for processing and export, addressing rural poverty at scale and safeguarding forests; increased the income of Kenyan farmers by 400% through cultivating chrysanthemum for pyrethrum production; scaled up low cost education in countries across the world taking an enterprise approach; grown cassava for biodegradable plastics; and trained prison inmates in Singapore to work in call centres and offered employment on release, creating lasting incomes and vastly reducing recidivism. Not only do all these – and other – projects address pressing and difficult social problems, but they also make sustainable profits.

Underlying this approach, as emphasized by Alice Lin Fabiano, CEO of Johnson & Johnson Impact Ventures, are inclusive business principles. Recognising and investing in people enables innovation for and within marginalised communities. A good idea can come from anyone, anywhere; but while talent is equally distributed around the world, opportunity is not. Even within developed economies, there is stark inequality: recent research looking at over 200 health tech start-ups in the USA showed that 80% of venture capital funding went to all-male teams. Less than 3% went to companies with female founders, and for black, Asian and Latin females the figure was less than 2%. Eighty per cent of funding went to companies in just three cities—San Francisco, Boston and New York. More widely, less than 5% of impact investment worldwide is currently in healthcare.

Given these structural inequities, Johnson & Johnson is attempting to disrupt how healthcare is received and experienced through work across three platforms: direct investment in companies and social business; catalysing finance for projects; and using a grant-making arm to build strategic capacity and broaden the wider health ecosystem. Portfolio companies have now reached over a million lives, and early indications are that investments are doing well: the companies involved have now raised close to USD 10m.

Another example of a disruptive response to inequity comes from DiaTropix. Presented by Pascal Vincelot of Fondation Mérieux, this is a company bringing greater access to rapid diagnostics across Africa and in low- and middle-income countries elsewhere. 21 of 28 poverty-related diseases have a diagnostics gap. In response, DiaTropix has set out to produce diagnostics that match patients’ needs where tests are not available, unsatisfactory or unaffordable. Started in 2019, the company is manufacturing products in Senegal – “close to the battlefield… in Africa, for Africa” – following a disruptive, demand-driven, not-for-profit model. Prices are subsidised by membership that offers priority access to products at reduced price. Membership fees defray fixed costs and ensure high quality manufacturing at low cost. A pilot manufacturing plant is up and running with a production target of two million ISO-certified tests a year at $1 each, already providing 11 permanent jobs and 18 temporary posts. DiaTropix has already produced and sold around one million COVID tests.

Another social enterprise, Nairobi-based Sanergy – presented by founder David Auerbach – is remarkable for its circular economy model. Cities in low-and middle-income countries are growing fast, raising serious environmental, sanitation and waste management challenges. Issues of untreated waste and food security for large populations are verging on crisis levels. Nairobi has grown from a population of four million to five million people in just a decade and now produces 2,000 tons of organic and sanitation waste every day, causing rising emissions, water pollution and health risks. Intensive agriculture decreases yields and demand for animal feed is rising as the availability for farmed protein with which to make it is falling.

Sanergy’s solution is particularly elegant. The company has built an expanding network of sanitation and waste connection facilities, including over 4,000 waterless toilets serving 150,000 people in the city’s informal settlements. Waste is collected from these toilets in safely reusable form, along with other waste from businesses, hotels, kitchens, airports and other sources around the city – keeping it from being dumped in the environment and ensuring it is collected and processed safely and professionally. It is taken to the largest organics recycling plant in East Africa, where it feeds black soldier fly larvae in one of the world’s largest growing facilities. These larvae eat the waste before they are harvested and processed into protein for chicken and fish feeds. The residue they leave behind is also processed to make organic fertilisers that are sold to farms, increasing their yields, or to make briquettes that are a relatively environmentally friendly fuel source in local factories.

All this has been done and scaled up to world leading levels using a private sector approach in the middle of a pandemic. A sophisticated network of facilities and logistic capacity serves 150,000 people where they live –with the added benefit that during the pandemic, Sanergy became a trusted logistics partner for government and private sector actors trying to distribute essentials, such as soap and sanitizer, into communities where people were being asked to stay at home.

The Schwab Foundation for Social Entrepreneurship is a global platform established to accelerate outstanding models of social innovation that has 400 fellows and has incubated projects with an estimated direct impact on over 620 million people around the world. Director François Bonnici argued for the importance of addressing the systemic barriers of poverty – “the who and the how”. The world has made fantastic progress in absolute terms, but inequality continues to grow in many ways – around income, gender, youth participation, access to health care and more – and has only been exacerbated by the pandemic. Poverty is a wicked problem, the root causes of which are incredibly difficult to address. Individual actors cannot control the elements of entrenched problems.

The Schwab Foundation’s response is to support entrepreneurial businesses that offer empowering answers to challenges in poor communities, going beyond just business models to practices that address systemic barriers. Enterprise fighting poverty is not just one thing, but rather a spectrum of innovation and enterprise – and there are both exploitative and empowering ways of running social enterprises. The Foundation, therefore, aims to emphasise processes and people over business models: if we are to overcome poverty, we need to build communities of people who operate their own systems: owners, decision-makers, and captains of their own destinies. The underlying principles of this approach are threefold: foster connection; embrace context; and reconfigure the power dynamics at play. In practice, this means cultivating collectives, equipping problem solvers, promoting platforms and disrupting entrenched policies and patterns. 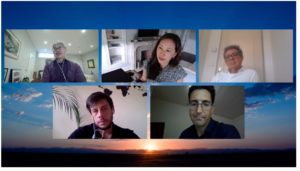 Unsurprisingly, all these projects have been affected to some extent by the pandemic. Health inequity and provision gaps have widened, trust has fallen around the world, and the mis- and disinformation of the infodemic have given rise to huge and intractable new problems – not least vaccine resistance. Some processes – funding for nascent companies, for example – have slowed or stopped. Logistical and operating problems have been predictable, and of course foremost among the challenges has been the human impact. Significant deaths, illnesses and pandemic related stresses have heavily impacted staff members and their families in organizations all around the world. What has been maybe less predictable, and what stands as testament to the potential resilience of organizations that operate close to communities, have been the chances to turn the pandemic to a positive end. COVID-19 has created a renewed understanding of old challenges that need accelerated attention, and renewed urgency – and in some cases resources – to act, now.

The pandemic has boosted some industries, bringing with it opportunities to realise visions, get new products to market, facilitate quick tech transfer and build fruitful new partnerships that may stand for the long term. Organizations have engaged more deeply with the communities they serve, and many workers around the world, having chosen to work in social enterprise, with all that entails, have risen admirably to the challenge to serve their communities and constituencies in more pronounced ways.

This session showed some of the many ways in which it is possible to address, and resolve, issues of poverty through enterprise, ensuring that communities gain lasting value. As the pandemic is brought slowly under control, social enterprise is likely to remain a crucial approach to solving social issues in the longer term. But it will be one weapon among many. Philanthropy and aid will always be needed, especially in humanitarian crises. Enterprise may be a lasting solution, but it takes time and usually requires political stability. The challenge now, as we move forward in an increasingly uncertain world, is to take the many models of social enterprise – investment approaches, business models, processes and everything else – and put them to work where they are most needed, in the most effective ways we can. The most pressing question for all of us, as Dr Bonnici put it, may well be: “How much are we prepared to change to do that?”

Learn more about Azza Karam @Mansoura1968, the first woman and first Muslim to be appointed secretary-general of Religions for Peace