The Courage and Sacrifice of Leadership 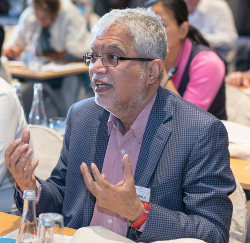 What would help boost your projects?

To boost one’s enterprises or projects requires meeting likeminded and complementary people who share the same values, who are fired by the same passions, and can create a marketplace for making things happen, which are not just accidental. Thus, in order to be successful in anything, a sense of shared purpose is vitalto convene and unite people.

What are challenges, ideas, or projects, you’re currently working on or of interest to you?

A couple of challenges particularly interest me. One is to find a more sustainable and dignified approach to the needs of forcibly displaced populations – bith internally and refugees, to try and improve the current ad hoc system whereby they receive healthcare or don’t, depending on where they are, who they are, and who gets to be near them. The global system for handling people on the move, especially people forced to leave by misfortune – whether if it is economic or political – is broken. It is not a lack of resources that is the issue, but the lack of imagination, the lack of empathy, the lack of being able to get out of the bureaucratic box of classifying people in particular categories. It is a problem of vision. So that is something I think we need to do much more on.

What to do in humanitarian situations, especially in terms of building the coping abilities or resilience of populations struck by recurrent or prolonged crises, including long-standing conflicts is a continues challenge.  Traditional forms of external charity and humanitarian aid are an unreliable instrument, and the way we provide this is so demeaning as it takes away what little humanity is left in people who are struggling to survive or manage their lives. The humanitarian system is broken and I think we need to find better ways of dealing with that.  That is where the private sector can come in to generate a spirit of enterprise amongst needy populations.

A third area of interest is how can we foster courage in people, so that everyone who sees injustice in any area, is empowered to speak up, to do the right thing within their own area. Imagine a world where everyone could, without fear of favor, be able to do the thing that is right rather than worrying about his or her job, or function, or status, or egos, or being afraid.

In your book, Against a Tide of Evil, about your time as head of the UN in Sudan in 2003, you demonstrate how leadership requires going against the status quo. How did you maintain the perseverance, the confidence, to keep going, even when people at the top were telling you ‘no?’ Additionally, how can we inspire people in positions of leadership to challenge the status quo?

Second, to display courage by standing up for something, you must realize that that there will be personal costs to bear. People have to understand that there is no gain without pain. You have to be prepared to make sacrifices, perhaps, in your career or personal relationships, and it may even be life threatening in extreme circumstances.  Everyone is capable of being courageous and fearless, but this is beaten out of them by the system, by their education, by culture, by family, and by their own self-preservation instincts. However, in the end, it is only being able to rise above the risks to one’s own interests that will save the world – by acting with courage and love. to make that a norm would be a whole-of-society effort. Of course, you may get courageous leaders thrown up by chance, such as Mandela, but you cannot hope to create a good world by just relying on random chances.

In summary, leadership is a combination of courage, being prepared to pay any necessary costs, being diligent and understanding that there are sacrifices to bear along the way.

What recommendations would you give to the Youth?

Young people should discover their own model, but in doing so, consider three things.  First, continue to ask questions until you are satisfied that you have the truth. The youth are inheriting the world as is, but that doesn’t mean that they have to accept it or take it for granted. So, they should continue to challenge the way the world works and how it can be better.

Second, the youth must be much more open to connecting, which they are anyway in the digital age, but forming communities of ideas, not just communities at school or college, but to think of community in a much bigger way.

Third, young people had better be prepared that they will not be as rich, as well off, or as secure as their parents; the youth will face much more turbulence and insecurity and unpredictability. This does not mean that they should be pessimistic, but they must find some new approaches. Don’t allow the past to be a prison, but a platform to launch into the future. History is to be understood in context, so learn lessons, glean the good and the bad things done, but be aware that the past is just a guide. The future is uncharted. There isn’t a pre-destined map that has to be followed.

What is your vision of the world in the next 20 to 30 years?

There is a vision I’d like to dream of, but the vision that I think will manifest itself is a world of struggle. I see a great battle, I see a world of many battles. I see that the next 20 to 30 years will be a big fight, not necessarily a physical fight, but a fight of ideas, of right and wrong, and a competition of values.  It will be very exciting and worthwhile. If I live long enough, I’d love to be part of that battle of ideas, and battle for the values that I believe in. In doing so, I would be uncompromising. Remember that there is no point in going into battle for anything good unless you have the hunger  to win. So, I would be completely prepared to give all and make all the necessary sacrifices.

Coalition launched to accelerate research on the prevention and treatment of COVID-19 in low- and middle-income countries https://www.dndi.org/2020/media-centre/press-releases/coalition-launched-accelerate-research-covid19-low-middle-income-countries/ via @DNDi #COVID19 #Diplomacy