A program to prevent HIV and syphilis among the indigenous populations of the Amazonian rainforest, in collaboration with the Brazilian Ministry of Health. The indigenous populations do not have the means to protect themselves against HIV and syphilis infection. In collaboration with our local partners, we decided to help them take preventive measures.

Since 2013, Adele Benzaken has been deputy director of the STD, AIDS and viral hepatitis department of the Brazilian Ministry of Health. Dr. Benzaken is also a consultant at the  Pan American Health Organization, where she co-manages the validation committee for the elimination of mother-to-child transmission of HIV and congenital syphilis (see attached video).

Dr. Benzaken managed the Alfredo da Matta Foundation of Tropical Dermatology and Venereology from 2007 to 2010, She was a member of the WHO Expert Advisory Panel on Sexually Transmitted Infections including HIV from 2008 to 2013, and UNAIDS Country Coordinator from 2012 to 2013. 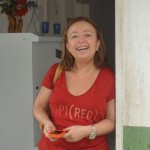 They support the project

Blog article(s) related to this project